A misdemeanor is a less serious crime than a felony. Felonies are the most serious crimes you can commit and have long jail or prison sentences, fines, or permanent loss of freedoms. Misdemeanors usually involve jail time, smaller fines, and temporary punishments. For example, you can be slightly over the limit during a DUI stop and get a misdemeanor, but if you have children in the car or are severely over the blood alcohol limit you can face a felony charge.

In general, infractions are the least serious type of crime. An infraction is the violation of a rule, ordinance, or a law. In most jurisdictions, there is no jail time associated with an infraction and it will not appear on a criminal record. Typically, payment of a fine will be the only punishment, but federal law classifies an infraction as a crime with a jail sentence of not more than five days. Traffic tickets are examples of an infraction, but other offenses may also be categorized as infractions, such as trespassing, littering, disturbing the peace, and other petty offenses.

Misdemeanors are more serious than infractions. Under federal law and in most states, a misdemeanor is a criminal offense that carries a potential jail term of less than one year. Some states define a misdemeanor as a crime that is not a felony or an infraction
Just as infractions are sorted into classes misdemeanors are as well. Under the federal sentencing guidelines, the classes are divided up by the maximum imprisonment for the offense.

A felony is the most serious type of crime. The term felony is not uniform throughout the United States, while the federal government defines felony as a crime with a punishment of more than one year, states are less strict about the definition. Maine and New Jersey do not classify their criminal offenses at all. Some states use the term felony, but do not define it.

However, most states, 43 in all, use and define the term typically by reference to either the length of a sentence or the place of incarceration, sometimes both. For instance, Idaho defines a felony as “a crime punishable by death or by imprisonment in the State prison”, while Georgia defines the term as “a crime punishable by death, imprisonment for life, or imprisonment for more than 12 months.” Still, other states will define felony by reference to the length of sentence and the place the sentence will be served.

Typically, though a sentence of more than one year that will be served in a state or federal prison will be considered a felony. As with misdemeanors, Federal law breaks down classifications for felonies using sentencing guidelines by the amount of prison time.

Also known as petty crimes, infractions consist of minor criminal offenses. Most infractions are punished by fines instead of jail time and do not require attendance in court. Infractions are classified as local crimes against traffic or noise violation laws. Although an infraction is considered to be a minor case, failure to resolve the penalty charges within the deadline could lead to greater consequences. For example, multiple points on a license could lead to license suspension or revocation. In addition, the accumulation of infractions could develop into a misdemeanor or possible jail time. Different infraction cases include:
Running a stop sign
Speeding while driving
Violation of building codes
Littering
Disobeying seat belt laws
Misdemeanor 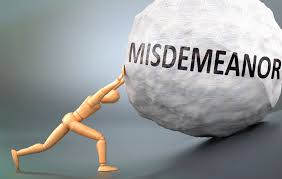 Felonies are the highest level of criminal offenses involving the most severe penalties. Felony charges affect every member associated with committing the crime including the offender and their accomplices. An accomplice includes anyone who aided the offender before, during, and after the crime. Felony penalties are dependent on the crimes’ level of severity and typically involves prison time. Felony prison sentences range from over a year to life without parole and in some cases execution. In addition, felony offenders lose their civil rights such as the right to own a firearm and in some cases the right to vote. Felonies are also difficult to expunge and will often remain on an individual’s record permanently. Felonies are divided into violent and non-violent crimes and are classified into several categories. The most common forms of felonies include:
Rape
Murder
Arson
Drug abuse violations
Aggravated assault

In most states, crimes are classified in one of two categories: felonies and misdemeanors. Sometimes, there are also a third class of crimes called petty crimes or violations, and are usually punished by a fine with no jail time (these often include traffic infractions). Understanding the difference between a felony and a misdemeanor can be critical in understanding charges against a person, terms of plea agreements, and potential punishments.

Some crimes, whether charged as a felony or a misdemeanor, may have secondary consequences to consider. For example, more and more states require those convicted of certain crimes with a sexual element to register as sex offenders or sexual predators. Other types of crimes may disqualify you from other types of licensing or even come back to haunt you should you ever testify if they involve a crime of dishonesty, such as writing bad checks, perjury, or fraud. Additionally, some states have enacted civil penalties for criminal acts, such as Florida’s Jimmy Ryce act, which allows for the involuntary civil commitment of a violent sexual offender (i.e., if someone commits a sexually violent offense like rape, they can be sentenced to a mental institution for the rest of their life).

Whether charged with a misdemeanor or a felony, any criminal charge is a serious matter, possibly one of the most serious encounters a person will have with the legal system. As such, it is critical that if you or someone you know is dealing with a criminal charge, you should contact an experienced, qualified attorney to assist you with your case.

California Penal Code allows for three main categories of punishable offenses— an infraction, misdemeanor, and felony—as well as a fourth category called a “wobbler” which can be charged either as a misdemeanor or a felony, depending on the circumstances.

For those facing a conviction, the difference between an infraction, misdemeanor, and felony are significant. An infraction, the least serious offense, has less severe consequences than a misdemeanor or felony. A good criminal defense lawyer may be able to plea bargain your offense down to a less serious category, saving you from some of the long-term consequences of more serious crimes, such as a criminal record, jail time, and losing the right to vote.