Arraignment is the process when a person accused of an offence is read the charge/s (the indictment) and asked to formally enter a plea, either of guilty or not guilty, to each matter charged. Arraignments in New South Wales are governed by the Criminal Procedure Act 1983.

The charges may be read by the Judge or the Judge’s Associate. As each charge is read aloud to the accused, they will be asked to enter a plea of either guilty or not guilty. This will proceed until each charge has been read, and a formal plea entered.

If the accused pleads not guilty at arraignment, then a trial date will normally be set.

Can I Represent Myself?
A person charged with criminal offences has the right to represent themselves. However, the matters that proceed in the District or Supreme Courts are serious and can often be complex. For this reason, should an individual not be legally represented at arraignment, the Judge may adjourn the matter to ensure that the accused has had the opportunity to obtain legal advice and/or representation before entering a formal plea. This is particularly likely to occur if it appears that the accused is inadequately prepared or if there are complex legal issues involved.

Before the trial
The first time the accused appears in the District or Supreme Court after being committed for trial, each charge is read out to them and they are asked again to plead. This is called an ‘arraignment’.

If the accused pleads ‘not guilty’ to any charge, the court will set the trial date. It will usually be at least several months away.

Before the trial starts the prosecution and defence lawyers will attend court a number of times for what are called ‘pre-trial conferences’ or ‘call-overs’. Victims and other witnesses do not to have to attend these. If the accused is in custody, they will usually appear via AVL.

If the accused changes their plea to ‘guilty’ at their arraignment, a date will be set for a sentence hearing. 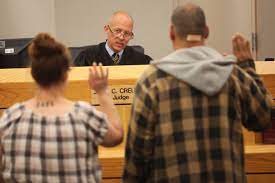 Main steps in the trial
To follow are the main steps in a criminal trial by jury in the District or Supreme Court in NSW:

The 12 members of the jury are selected from a larger group of potential jurors by drawing numbers from a box, and are ‘sworn in’.

The judge addresses the jury about the trial. This usually includes explaining the jury’s role, the trial process, the need for the prosecution to prove the case ‘beyond reasonable doubt’, and the main issues in the case, if they are known.

The ODPP prosecutor (the prosecution) makes an opening statement about the case against the accused.

The accused’s lawyer (the defence) may also make an opening statement.

The prosecution calls its witnesses. Each witness gives their evidence-in-chief, then is cross-examined by the defence. The prosecution may then re-examine the witness, and the judge may also ask some questions (see Going to court and giving evidence).

The defence calls its witnesses. The accused does not have to give evidence but if they are going to it will be as a witness for the defence. The defence witnesses give their evidence-in-chief and are cross-examined by the prosecution. The defence may then re-examine the witnesses, and the judge may ask them some questions.

If genuine questions are raised at any time about whether the accused is fit to stand trial, the matter will follow a different path (see Crimes involving mental illness or impairment).

The prosecution makes its closing address to the jury.

The defence makes its closing address to the jury.

The judge sums up the evidence for the jury.

The jury members go into another room to consider whether the accused is guilty or not guilty. When they have all reached the same decision, they return with the verdict. (In some cases, the court will accept the verdict of the majority of jurors.)

If the verdict is ‘not guilty’, the accused is free to go. This is called an acquittal and cannot be appealed.

If the verdict is ‘guilty’, the judge will sentence the accused, usually on a later day.
Sometimes the jury is ‘hung’, which means the members of the jury can’t agree on a verdict. If this happens, the ODPP will consider whether to run the trial again, before a new jury. We will talk to the victim and the police officer in charge before making this decision.

Arraignment will occur more than once for each criminal trial.

When does an arraignment take place?
An arraignment occurs after you have been committed for trial or sentencing in the District Court by the Local Court. Generally, in a criminal trial, arraignment can take place on 3 separate occasions.

Every person who is committed for trial or sentence for an indictable offence is remanded (put in either in custody or released on bail), to await trial or sentence [Criminal Procedure Act 1921 (SA) s 120(2)]. They are remanded until they appear before the District Court or the Supreme Court to be arraigned (formally charged in the superior Court with the offence), on the next arraignment day.

In the superior Court the defendant is referred to as the accused.

In the Supreme and District Courts, all accused must attend to be arraigned in person and, when the charge is read, plead either guilty or not guilty (unless fitness to plea is raised which would be dealt with at a directions hearing).

Accused people pleading guilty may be sentenced on that day, however a later date will usually be set for submissions on sentence [see rule 9(3) Supreme Court Criminal Supplementary Rules 2014 (SA)].