Have you ever thought of how much time your car spends sitting in the driveway and how much you spend on average each year to keep it running? It’s not something most of us care to think about because a car is essential, so it’s a cost we bear. But the cost associated with having a car is now something we can offset through the sharing economy.

Hopefully by the time we get to retirement most of the financial hard yards have been done and we’re in a position to embrace ‘me time’. Most of us hope to be able to choose when we retire, but sometimes it happens earlier than we planned. Depending on personal interests and individual finances, how you spend your retirement and how much spare money you have will be different for each person.

We all experience the creeping cost of living – energy bills, dining out, and tradespeople, seem to cost the earth these days. No matter how much solid financial planning we’ve done, retirement still involves keeping an eye on the finances. The good news is that there are now some smart ways to make extra money that don’t require a big time commitment and provide a good return.

What is the sharing economy?

Today the sharing economy is providing many people with a regular income source, as well as allowing others to save money on a range of products and services. If you think the sharing economy is new, think again. The most recent examples we’re all familiar with are Airbnb and Uber, but if you’ve ever bought or sold anything on Ebay, then you’ve participated in the sharing economy. It includes things like sharing out a room or part of your house, sharing tools, and even sharing a service, like dog walking, with people who need it. It’s also possible to share your car, and provide a car rental service to your own community.

The reason the sharing economy is so popular is because it’s so easy to use, and it works to the advantage of sellers, as well as buyers. It’s an easy way for people to earn some extra money, by making use of their existing assets and skills. And with the sharing economy’s broad reach of services, there’s something for everyone. Not everyone has a room to rent on Airbnb, but almost everyone has a car! 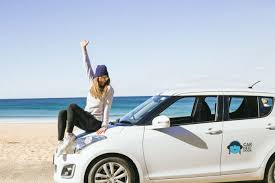 The average cost of running a car is at least $120 per week, according to research by RACQ.  This is often surprising to owners who sometimes fail to consider the ‘hidden’ costs of car ownership like depreciation and insurance. Even more troubling, is research showing that cars generally sit parked for 95 per cent of their life. For this reason, a growing number of people are choosing to offset the costs of car ownership through car sharing. If you’re retired and don’t drive much, this can be a great source of passive income.

There’s no need to even meet the person who is borrowing your car. Your car can come and go from its nominated car spot when you aren’t using it and you’ll be quietly off-setting the annual cost of car ownership. Car sharing can earn anywhere from $2,000 up to $10,000 annually, providing good savings for retirees. Some car sharing businesses like Car Next Door even guarantee that most of their customers will earn a minimum of two thousand dollars annually.

When Andrea and her husband Rob retired, they sold their house and moved to a smaller home in inner Melbourne to be closer to their daughter and grandchild.

“Both of us are city based during the week”, says Rob. “Andrea babysits three days a week, and when we go out we tend to use public transport or walk. We really noticed how much less we were driving and I started to think about the value of even having a car. The only thing is that on the weekend we use it and we use it for going on holiday.”

After Andrea and Rob’s daughter mentioned they could rent their car out during the week, they decided to test it out.

“When my daughter told me I could rent out my car it seemed like a great idea. The car is booked about five times a month, and we’re making about $500 a month, which really helps with the overall cost of the car. If we’re not using it, we may as well get some passive income from it and it doesn’t take a whole lot of time to manage either.”

Car sharing can work particularly well if, like many retirees, you take off on an extended holiday without your car. Rather than paying for long term parking or letting the car battery go flat while you’re away, you can keep the wheels rolling and earn some good money for the duration of your holiday. Whenever your car is being used it is covered by comprehensive insurance, so you have complete peace of mind if anything should go wrong.

Car sharing is just one of the ways retirees can take advantage of the sharing economy to boost income during retirement. It’s a perfect way to offset the cost of car ownership and provides a really flexible, easy to use, and safe way to do it.