A tiny number of states have a procedure for a nol pros (by the plaintiff) of a civil case. Other states, such as Georgia, simply call this a dismissal without prejudice that permits the case being refiled at any time within the statute of limitations.

The procedure arose in England as part of its Common Law. Most of the American states (including the 13 original colonies) adopted the English common law system, subject to creating new laws targeted to American Justice. You may be asking yourself, “is a nolle prosequi a good thing?” Yes, if it ends with your criminal record being expunged or receiving a record restriction in GA.

If a first-year law student walking in the door for the first day was asked to define nolle prossed, 99% would flunk out that same day. Not one would have a good nolle prosequi definition to offer. Yet, the crux of this legal issue has reached the United States Supreme Court and been ruled upon in a way that favors the accused, in Klopfer v. North Carolina, 386 U.S. 2013 (1967).

Often misspelled by a prosecutor (when a case ends by a nolle prosequi filed in the record), such documentation usually indicates that charges cannot be proved. For a criminal prosecution, in court documents as noelle prosequi or noelle prossed, the gist of this phrase is that the prosecutor has made a discretionary decision to drop (dismiss) the charge.

The term “nolle prosequi” is a Latin phrase that means “unwilling to pursue.” Pronounced as nol·le pros·e·qui (nälē ˈpräsəˌkwē), the term is sometimes abbreviated as “nolle prosse” or “no pross.”

Under common law in the United States, the term was used by the prosecutor to declare voluntarily ending a criminal case after the filing of formal charges but before the case could be dismissed by the court or a verdict could be rendered at trial.

Is nolle prosequi a good thing? Yes, the “nolle prosequi” is good because it represents the formal notice of abandonment of the prosecution without a conviction.

Depending on the circumstances, it might be advantageous for the defense attorney to object to the entry of the “nolle prosequi” and instead request that the court enter an involuntary dismissal.

In addition to an entry of a nolle prosequi, the other ways in which a criminal case might be terminated in a favorable way for the defense include:

an acquittal at trial;
an order of dismissal reflecting an affirmative decision not to prosecute;
a dismissal based on insufficient evidence, the running of the statute of limitations, or a speedy trial issue; or
a granted writ of habeas corpus.
If an arrest is made, but the prosecutor declines to file any formal charges, then the termination of the case is accomplished by the filing of a “no file” form without the need for a nolle prosequi.

Nolle prosequi is similar to a declination of prosecution, which is an agreement not to prosecute which may be made by an attorney, but also by aggrieved party. In contrast, nolle prosequi is usually made after a decision to prosecute has already been made. A declination of prosecution may be made for many reasons, such a weak evidence or conflict of interest. 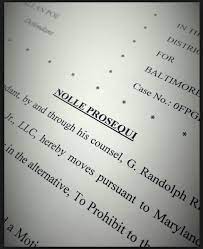 It is a voluntary dismissal by the prosecution, but it is not a determination of guilt or innocence. It’s not an acquittal. However, when a defendant’s case is nol prossed, it does mean that the charges against him or her have been dropped.

REASONS WHY A PROSECUTOR MAY NOL PROSS YOUR CHARGES

NOLLE PROSEQUI DOES NOT EQUATE TO AN ACQUITTAL

If a prosecutor does decide to nol pross a defendant’s case, it is important for the defendant to understand that a voluntary dismissal of his or her charges does not mean that he or she has been judged innocent and acquitted. The prosecutor can decide to take another look at the defendant’s case and upon review, change his or her mind and re-indict the defendant for the same exact charges if the evidence turns out to be sufficient after all. Or, new evidence may emerge in the case and make the evidence against the defendant stronger. It’s also important to note, here, that the legal concept of double jeopardy does not come into play in a nolle prossed case because no prosecution took place. Double jeopardy is a protection guaranteed to us under the Fifth Amendment of the United States Constitution that prohibits any person from being prosecuted for the same offense twice.

DOES A NOLLE PROSEQUI CASE QUALIFY FOR EXPUNGEMENT?

Yes. Generally, dismissed cases that result in a non-conviction qualify for expungement or record restriction. This includes nolle prossed cases. However, record restriction is not available in cases, which the charges were dropped because the defendant plead guilty on another charge in the same case, was prosecuted for criminal activity in another jurisdiction, because evidence was suppressed or because the defendant had some form of immunity.