In Australia, only licensed gun owners may lawfully acquire, possess or transfer a firearm or ammunition

In law, personal protection is not a genuine reason

The minimum age for gun ownership in Australia is 18 years, or as young as 11 years while under the immediate supervision of an appropriately licensed adult

An applicant for a firearm licence in Australia must pass a background check which considers criminal, mental health, physical, addiction, domestic violence, residential and other records

In Australia, third party character references for each gun licence applicant are required for some licence categories in some jurisdictions

Where a past history, or apprehended likelihood of family violence exists, the law in Australia stipulates that a gun licence should be denied or revoked

Compare Firearm Safety Training
In Australia, an understanding of firearm safety and the law, tested in a theoretical and/or practical training course is required for a firearm licence

In Australia, gun owners must re-apply and re-qualify for their firearm licence every one to five years depending on the licence category

In Australia, authorities maintain a record of individual civilians licensed to acquire, possess, sell or transfer a firearm or ammunition

Licensed firearm owners in Australia are permitted to possess ammunition only for those firearms for which the purchaser is licensed, with a limit on the quantity of ammunition that may be purchased in a given period.

In Australia, the law requires that a record of the acquisition, possession and transfer of each privately held firearm be retained in an official register

In Australia, licensed firearm dealers are required to keep a record of each firearm or ammunition purchase, sale or transfer on behalf of a regulating authority

In Australia, licensed gun makers are required to keep a record of each firearm produced, for inspection by a regulating authority

In Australia, State agencies are required to maintain records of the storage and movement of all firearms and ammunition under their control

Less than two weeks after the Port Arthur massacre, all six Australian states agreed to enact the same sweeping gun laws banning semi-automatic rifles and shotguns – weapons that can kill many people quickly.

They also put more hurdles between prospective gun owners and their weapons.

Australia has 28-day waiting periods, thorough background checks, and a requirement to present a “justifiable reason” to own a gun.

Unlike in the US, self-protection is not accepted as a justifiable reason to own a gun.

In the 21 years since the laws were passed, about one million semi-automatic weapons – roughly one third of the country’s firearms – were sold back to the government and destroyed, nearly halving the number of gun-owning households in Australia.

The number of Australia’s mass shootings dropped from 11 in the decade before 1996, to one in the years since – the murder-suicide of a family of five in New South Wales in 2014.

Guns per capita in Australia and US: 1996 vs now
Australia 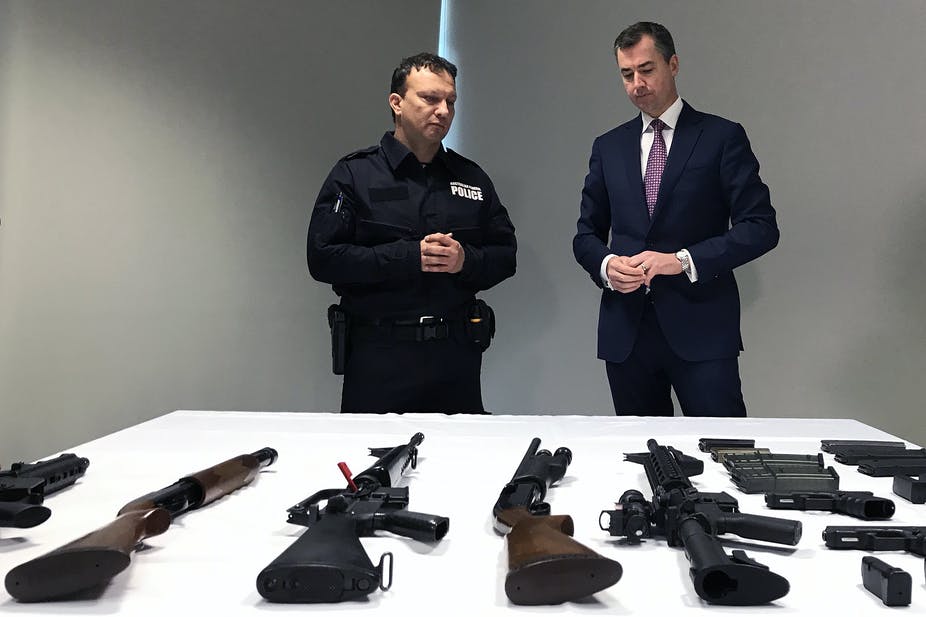 The Australian National Firearms Agreement (NFA) is often presented as a model for a minimal set of firearms laws for the United States.9 This agreement restricted access to some classes of firearms, regularized and tightened state-level licensing laws, and introduced a gun buyback scheme and amnesty that led to the recall of approximately 640 000 guns.10 Although it was designed to prevent mass shootings and may have been effective in this goal,11 some researchers have claimed that the NFA also had a quantifiable impact on firearms-related suicide and homicide. A 2010 study found an 80% reduction in suicide mortality attributable to the NFA12 but failed to adjust for the long-standing declining trend in firearm-related mortality and used ordinary least squares regression, limiting the validity of its findings.

The most recent study, published in 2016, found that firearm-related suicides and homicides declined more rapidly after the introduction of the NFA and concluded that the NFA was particularly effective against gun-related suicide deaths.13 This study did not provide a comprehensive statistical analysis of mortality, however, and suffered from a significant flaw that may have led to misleading results: it did not compare the impact of the NFA on intentional gun-related deaths after adjusting for changes in nonfirearm mortality that occurred in the same period. One 2006 study considered the possibility that there was a general downward trend in suicide deaths at the time the NFA was introduced but did not compare trends statistically and had only limited post-NFA data on which to make this comparison.

The buyback law was enacted in 1996 after a mass shooting in which 35 people were shot and killed and 23 injured at a cafe in Port Arthur, Tasmania.

Two buyback programs and 26 uncompensated amnesties between 1996 and 2015 resulted in the surrender of 1,038,089 illicit firearms, according to the report.

The Australian law has been invoked with increasing frequency in the U.S. by gun control advocates, who cite it to counter arguments that gun control cannot and does not work.

Simon Chapman of the University of Sydney and colleagues have watched to see what happened in Australia since then.

In the 18 years before and including the Port Arthur massacre, the new analysis showed that 13 mass shootings happened between 1979 and 2013. “None has occurred in the 22 years since,” they wrote.

“Many believe that these data indicate that gun law reforms effectively stopped firearm massacres,” the researchers wrote. “However, others contend that this interpretation is unwise because of the rarity of these events compared with more common incidents in which fewer than five persons died.”