Looking for something do this weekend in Melbourne?

Melbourne is a vibrant city with an exciting nightlife. Whether it’s clubbing until dawn at dance venues, catching a cabaret show, or a visit to the Crown Entertainment Complex, home to Australia’s largest casino, cinemas, discos, and designer stores, there is something for everyone. Melbourne has a strong bar culture and bars can be found all over Melbourne.

Crown is Melbourne’s premier entertainment venue, it is located on the Southern bank of the Yarra River. Crown houses bars, restaurants, nightclubs, shows, hotels and shopping with the centre piece being the Crown Casino.

The Crown Casino is one of the largest gaming facilities in the Southern Hemisphere, with the main gaming floor stretching half a kilometre. The casino has over 300 gaming tables operating 16 games.

Crown has many bars and lounges, which serve cocktails, drinks, and food, with some providing entertainment as well. Atrium Bar, Fidel’s Bar and Lounge, JJ’s Bar and Grill, Las Vegas Bar, The pub at Crown, Sports bar, Steakout, Tonic, and Velvet Bar are all located in the complex.

Crown’s 26 Restaurants offer world class cuisine. You can dine outdoors at the Riverside eateries, grab something quick from the international food court, or savour premier dining at some of Melbourne’s top restaurants.

Some of the biggest names in local and international entertainment have appeared at the Crown. The Palms at Crown and the Palladium at Crown are the two major showrooms; they host concert and theatre performances.

There is a Multiplex cinema showing the latest movies on seven traditional screens and six gold class screens.

There are two interactive game parks, Galactic Circus and M9 Laser Wars. Crown offers free live entertainment in its many bars and restaurants, from Jazz to dance bands, and DJ’s to Rock and Roll. 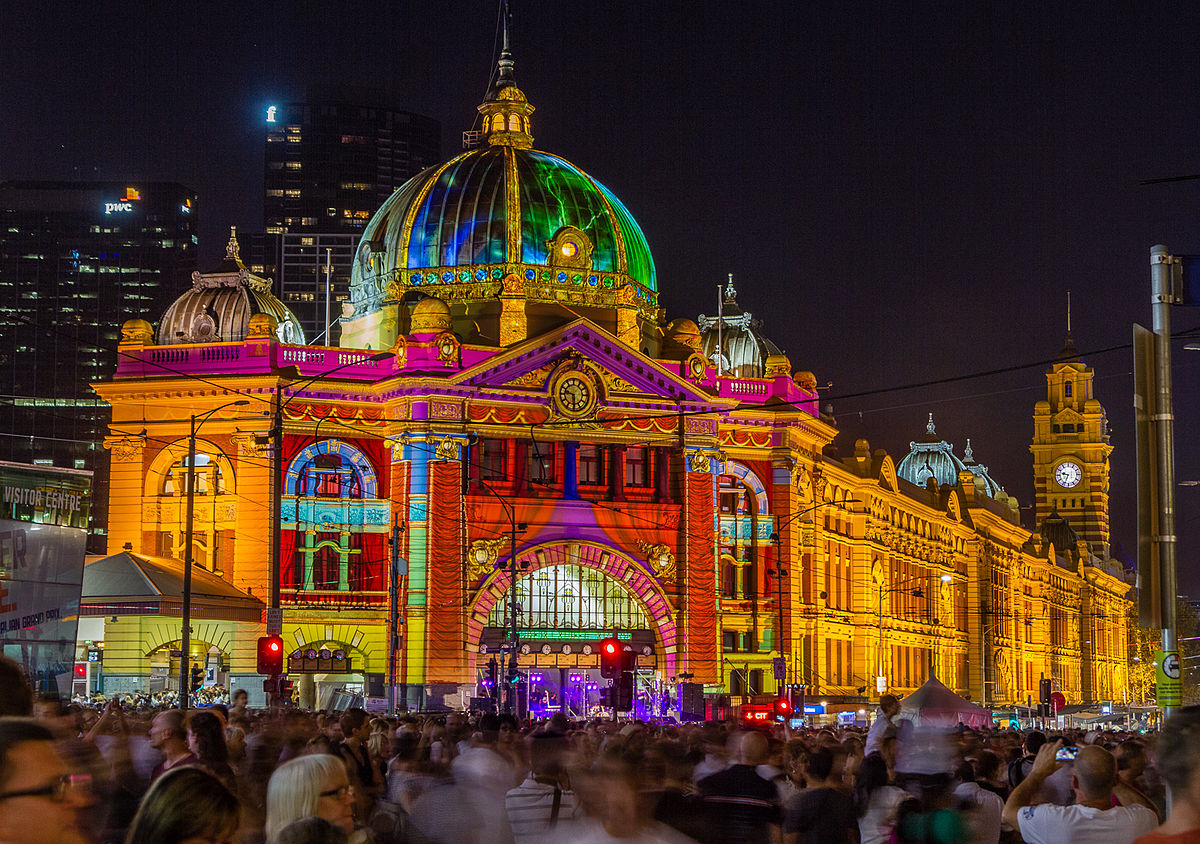 Crown has some of the world’s leading designer boutiques in its elegant shopping arcades. Designer brands such as Burberry, Prada, Versace, Lois Vuitton, and Montblac can be found at Crown, There are also many other general fashion and merchandise shopping arcades with a stand out being the Warner Bros Studio store, which is a must see for kids of all ages.

Australian Centre for the Moving Image

Melbourne is a city of many things. It has bars, fine dining, and live music, but so do many other cities. But one thing that makes Melbourne truly unique is that on top of all this, it is a city that loves to laugh. Melbourne is home to the globally recognised and appreciated Melbourne Comedy Festival. International acts fly into the city for a month of laughs. The city turns into a comedy hub where almost every bar, theatre, and restaurant becomes host to acts large and small and invites audiences from all around the world, to sit, eat, drink, and laugh the night away.

Founded in 1987 The Melbourne International Comedy Festival is an Australian institution and is well respected along with Montreal and Edinburgh as being one of the largest comedy festivals in the world.

But Melbourne isn’t only funny at festival time; it has a sense of humour that stretches throughout the calendar year with incredible comedy troupes, venues, and performances that continue to keep audiences laughing rain or shine.

Melbourne is the Australian destination for no-name comedians searching for their big break and there are many open mic nights throughout the week where you can go and see the next big thing making his or her nervous start to a big career.

At the local comedy clubs (of which there are many) you can stop in for a drink and watch the local comedian’s road testing new material. The comedy clubs are a great place to see new comers, international guests, and comedy teams entertaining themselves as much as the audience.

Comedy@Spleen is a great venue and comedy hotspot featuring drop in famous comedians and local talent. It is a great place to start taste testing Melbourne’s comedy cuisine.

You can find Comedy@Spleen at 41 Bourke Street, Melbourne.

IMAX movies under sixty minutes in length have lower admission prices than the feature length moves that are shown there, such as Tron Legacy 3D or Pirates Of The Caribbean 4 – 3D.

Theatre hire and private screenings, catering, and function rooms are available. To book these or for other information the phone number is (03) 9663 5454.

Tickets to IMAX movies can be purchased over the internet up to one hour before they start. It is necessary to pay for these by Visa or MasterCard.

IMAX is located at Rathdowne Street, Carlton. It is part of the Melbourne Museum site.

Car parking facilities are located there, while public transport also services the area. When taking the train into Melbourne, stop at Melbourne Central Station or Parliament Station and either walk or catch a tram to the IMAX. Buses also operate in the area.

Melbourne locals have always been big live music lovers and it is easy to see why bands both national and international love to play in this artistic city. Lines of music fans donned in skinny jeans and piercings flood the streets of the city and the northern suburbs every night of the week waiting for the next big gig.

And you can join them! Melbourne Venues are all versatile, and most bars, clubs, and restaurants can be turned into a live music venue in the blink of an eye. In a city with a celebrated tradition of nurturing new talent and supporting well loved favourites, it is not difficult to see why Melbourne has been fondly known as the Australian City of Rock.

Acts such as Crowded House, AC/DC, Jet, and Wolfmother all got their big break on the Melbourne Independent Music Scene, and there are sure to be many more to come. The independent scene is incredible in this city, where every night of the week there is a great new indie band playing in a club, bar, basement, or car park near you.

Local musicians play on the street, in the bars, in their front yards, with everyone looking for their big break and some of them getting it. As an audience you couldn’t ask for anything more. Pick a genre, any genre from Jazz to Funk to Heavy Metal, and there is someone playing to your taste somewhere in the city every night. Just pick up a copy of the local free entertainment guide to see the long list of venues, bands, and events on every week and take your pick!

Live music in Melbourne is an institution in itself; it is a part of the culture, the community, and what makes this city so unique.

For the night owls, Melbourne is a prime destination. In a city that never sleeps there are sure to be a rich variety of clubs with an amazing selection of beats and locations. Whether it is the big events you are looking for with big name artists, dance parties, DJ’s, and some of the hippest crowds around, or a more local club scene, Melbourne has something for everyone. Some of the biggest dance parties in the world are held in Melbourne, including White, a New Years Eve party with a difference.

To get a hold of the big events, you just have to pick up the local entertainment guide or look around for the signage and get in early for a ticket.

But on the weekends, Melbourne has its very own unique club scene that will give you that night out to remember. To get an idea of what is on offer just duck into a fashion or music store for free entry passes to some of the hippest venues around, or tune into the local radio stations. Dress codes do vary and Melbourne Bouncers can be a bit painful, so dress up instead of down to ensure you’re allowed access to whatever club you desire.

The main club districts are Chapel Street in South Yarra and Prahran in South Melbourne, as well as the City Centre. For celebrity spotting, Boutique (on Chapel Street) is worth dressing up for, and Club onesixone (also on Chapel Street) has huge nights with big name DJ’s and events that are worth a look in.

Remember on a big night out in Melbourne that public transport stops at midnight and starts again at 5am. There is a NightRider bus on the weekends designed for club goers and taxis are always a good, safe option after dark.

Southbank Promenade along the Yarra River is one of Melbourne’s most popular dining precincts. There are a broad range of cafes and restaurants, most with alfresco dining so you can take in the beautiful Melbourne skyline. There is always something to see along the promenade, including buskers and street theatre. There are also trendy arcades with little boutiques and galleries.

This is Melbourne’s leading performing arts complex and is recognisable for the iconic spire atop the Theatres building. It’s comprised of many Theatres, studios and entertainment venues. State Theatre seats 2,079 and is a showcase for ballet and opera performances.

Playhouse is a smaller venue designed specifically for dramatic performances that seats up to 884 people; the foyer has a collection of Aboriginal artworks.