What is defamation, and what is an example of defamation?
Defamation is the publication of material which harms a person’s reputation. Under defamation law, this can include written material, pictures, or spoken statements.

To succeed in an action in defamation, the plaintiff needs to prove that the material published by the defendant contained one or more defamatory “imputations”. Imputation is a negative claim about a person or their behaviour – for example if Jane Smith writes a social media post saying that “Joe Bloggs is a lousy plumber and a crook”, then Joe Bloggs might allege that the post contained imputations that he is incompetent and dishonest if those allegations are untrue.

the defendant can prove that what they published was substantially true;
the defendant was offering their honest opinion, rather than making a statement of fact; or
the defendant was innocently distributing defamatory material, for example where they are the employee of a newsagent or library.
What is the time limit for bringing proceedings in defamation?
In every State and Territory, the limitation period for an action in defamation claims is one year following the publication of the defamatory material. If a person fails to start court proceedings within this period, they will not be able to bring an action in defamation.

The limitation period can potentially be extended by a court up to three years after publication. However, to get an extension, the plaintiff has to prove that it would have been unreasonable of them to sue during the first year after publication. This will only be possible in rare cases and leave is not often granted by Courts if the 12-month limitation date is missed. If you think that a limitations date may shortly apply to your potential claim, or you may have missed a limitations date, you should seek urgent individual legal advice.

Is defamation illegal?
Defamation and anti-defamation laws are civil, not criminal, matter. Disputes involving defamation are resolved by individuals through the court system without the involvement of the police. A person who is successfully sued for defamation doesn’t go to prison or have anything listed on their criminal record. Instead, they typically have to pay the plaintiff damages, plus in many cases, some of the costs of the court proceedings.

If I successfully sue someone for defamation, what compensation am I entitled to?
Defamation damages are not fixed and depend on the circumstances of the case. In Australia damages can range between small sums and millions of dollars. Where the publication of defamatory material has caused significant harm to a plaintiff, such as financial loss or personal hardship, a larger award is more likely.

No matter what the likely damages are, court proceedings usually involve significant costs, so any action in defamation should be taken very seriously and advice should be sought before contemplating issuing proceedings. 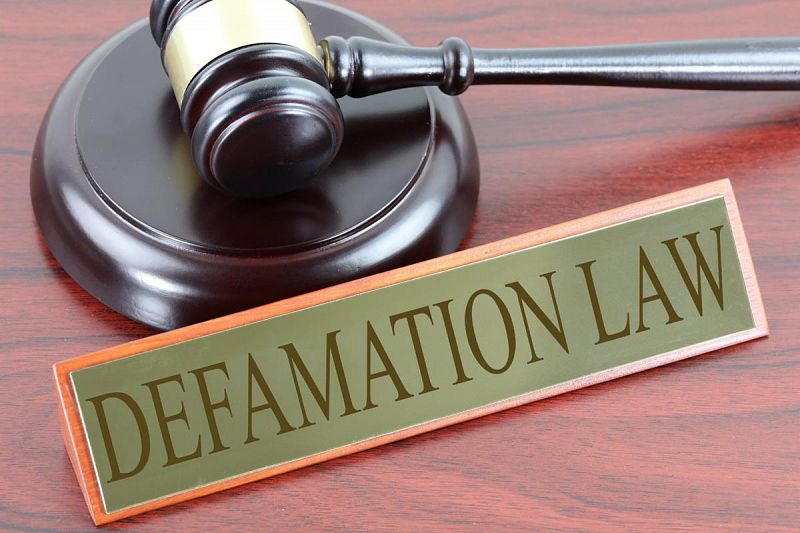 The court may look at a number of factors when calculating damages for non-economic loss:

The court may consider loss of business.

The maximum for damaged that can awarded for non-economic loss is $389,500. However, this limit can be exceeded with ‘aggravated damages.’ Further, compensation for economic loss does not have a limit.

Some factors for consideration include:

Whether the defamer failed to make proper inquiries prior to publication;

Whether the defamer retaliated at the defamed for suing them;

Whether the apology was inadequate, however an apology is not needed;

Whether the publication material was false;

And whether the defamer conducted themselves poorly in court, such as arguing baseless defenses.

Defamation law is a complex legal area which endeavours to allow individuals to protect their reputations without placing unreasonable limits on the discussion of matters of public interest and importance.

the recommendations of a statutory review by the NSW Department of Justice
Australian and overseas case law and
developments in technology.
Notably, the Senate Select Committee on the Future of Public Interest Journalism recommended in 2018 that the Commonwealth work with the other jurisdictions to reform defamation laws to promote an ‘appropriate balance between public interest journalism and protection of individuals from reputational harm’.

The review process will consist of two rounds of public consultation timed to enable jurisdictions to enact changes ‘from the middle of 2020’. A discussion paper was released in February 2019. Public submissions, including from the legal sector, media, telecommunications and technology companies, support a range of reforms.

The key to resolving any dispute is knowing where you stand and then making a decision based on accurate information.

Usually the hardest part is working out where you stand so you can make a sound decision.

It doesn’t matter if its a tax issue or dispute, a commercial law or contracts issue, a business issue, family law (including divorce, custody, wills), a property dispute, an issue on employment law, insolvency, migration, asset protection or defamation. The whole wide range of laws come down to one principle: know where you stand first and then make a sound decision found that foundation.

This means working out what your rights are, who to call, or what to read. Everyone seems to be an expert and there is always someone out there who speaks with great confidence but doesn’t know what they are doing. Its hard to find the right answer or know if what you are looking at is right.

We are hoping that the information we provide on this website helps you work out where you stand, or at least puts you on the right track. Be it an issue with the ATO, the OSR (Revenue NSW or the state revenue office of any state), a commercial dispute, debt recovery dispute with a creditor or debtor, an issue with a liquidator who is probably chasing you for a payment of some kind, it doesn’t matter.