Criminal law deals with behavior that is or can be construed as an offense against the public, society, or the state—even if the immediate victim is an individual. Examples are murder, assault, theft,and drunken driving. Civil law deals with behavior that constitutes an injury to an individual or other private party, such as a corporation. Examples are defamation (including libel and slander), breach of contract, negligence resulting in injury or death, and property damage.

Criminal law and civil law differ with respect to how cases are initiated (who may bring charges or file suit), how cases are decided (by a judge or a jury), what kinds of punishment or penalty may be imposed, what standards of proof must be met, and what legal protections may be available to the defendant.

In criminal cases, for example, only the federal or a state government (the prosecution) may initiate a case; cases are almost always decided by a jury; punishment for serious (felony) charges often consists of imprisonment but may also include a fine paid to the government; to secure conviction, the prosecution must establish the guilt of the defendant “beyond a reasonable doubt”; and defendants are protected against conduct by police or prosecutors that violates their constitutional rights, including the right against unreasonable searches and seizures (Fourth Amendment) and the right against compelled self-incrimination (Fifth Amendment).

In civil cases, by contrast, cases are initiated (suits are filed) by a private party (the plaintiff); cases are usually decided by a judge (though significant cases may involve juries); punishment almost always consists of a monetary award and never consists of imprisonment; to prevail, the plaintiff must establish the defendant’s liability only according to the “preponderance of evidence”; and defendants are not entitled to the same legal protections as are the criminally accused.

Importantly, because a single wrongful act may constitute both a public offense and a private injury, it may give rise to both criminal and civil charges. A widely cited example is that of the former American football player O.J. Simpson: in 1995 he was acquitted of having murdered his wife and her friend, but two years later he was found liable for their killings in a civil suit for wrongful death. 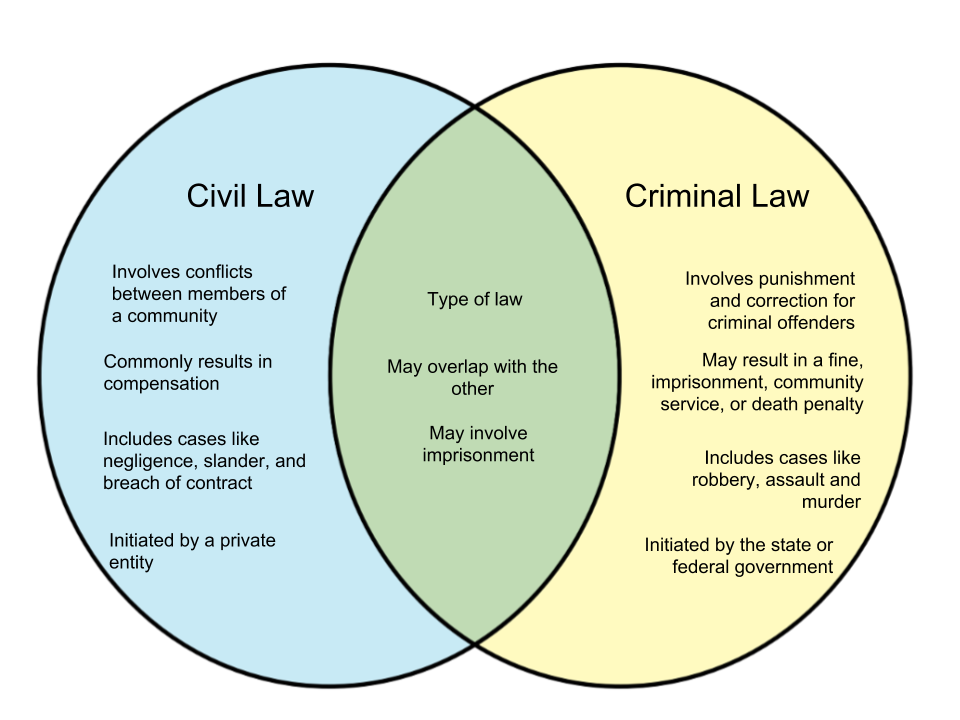 Since the rules or laws being violated vary between civil and criminal law, the specific conduct at issue also differs.

For example, a person intentionally killing another person is a criminal offense. A civil offense, on the other hand, often looks more like someone failing to follow city code—not clearing snow from a sidewalk that results in someone slipping and getting hurt, for example. Failing to shovel, in most cases, doesn’t live up to the standard of a criminal act, but it is against the rules and gives the person harmed an avenue for seeking justice for damages.

Another important distinction between civil and criminal law is the type of penalty paid for being found guilty. In a criminal case, if the individual charged with a crime loses the case, they’re likely facing incarceration or some type of probation. For civil cases, the resolution to a case doesn’t result in the “losing” party going to jail. Often the judgement results in a financial penalty or an order to change behavior.

Civil suits are also often settled outside of the courtroom. This typically includes a substantial payment to the accuser in exchange for the suit being dropped, and the defendant admitting to limited or no wrongdoing.

Another significant distinction between civil and criminal cases is what it takes for a party to win a case. In either trial, the accuser must meet a burden of proof—essentially an obligation to prove or back up the claims being made. Criminal cases, and the serious penalties that can accompany them, require a higher bar to be met than civil cases. In criminal law, the standard is that the accused are guilty of committing a crime “Beyond a reasonable doubt.”

For civil cases, the burden of proof is lower—usually based on the “Preponderance of evidence” or “Clear and convincing” standards. These different standards can seem a bit frustrating to those who aren’t familiar with them. You’ve likely heard of criminal cases where the evidence makes the accused seem like they’re probably guilty but they were not convicted. In these cases, Criminal Defence Lawyers in Melbourne worked to poke holes in the credibility of the evidence and witnesses presented to create reasonable doubt among jurors.

In civil law, a case commences when a complaint is filed by a party, which may be an individual, an organization, a company or a corporation, against another party. The party complaining is called the plaintiff and the party responding is called the defendant and the process is called litigation. In civil litigation, the plaintiff is asking the court to order the defendant to remedy a wrong, often in the form of monetary compensation to the plaintiff. In contrast, in criminal law, the case is filed by the government, usually referred to as the State and represented by a prosecutor, against a defendant. An individual can never file criminal charges against another person: an individual may report a crime, but only the government can file criminal charges in court. Crimes are activities punishable by the government and are divided into two broad classes of seriousness: felonies having a possible sentence of more than one year incarceration and misdemeanors having a possible sentence of one year or less incarceration.

One of the notable differences between civil law and criminal law is the punishment. In case of criminal law a person found guilty is punished by incarceration in a prison, a fine, or in some occasion’s death penalty. Whereas, in case of civil law the losing party has to reimburse the plaintiff, the amount of loss which is determined by the judge and is called punitive damage. A criminal litigation is more serious than civil litigation in that criminal defendants have more rights and protections than a civil defendant.

Criminal courts and civil courts have different standards. In a criminal court, a defendant is either acquitted or found guilty beyond a reasonable doubt. It is the responsibility of the state or federal government to prove that the defendant undoubtedly committed the crime.