Can You Grow Shiitake Mushrooms At Home?

The Shiitake is one of the more exotic strains of mushrooms, native to Asia and very popular in their cuisine – in addition, it’s also one of the easier strains to grow at home, even for beginners, which makes them a common choice for people who’re just starting out with growing mushrooms and need something a bit easier to practice on. In addition, Shiitake mushrooms tend to be among the more expensive ones at the store, which is another incentive for mushroom farmers to cultivate them on their own, as this allows them to use a high-grade strain of mushroom in their cooking without having to pay a high price for it, or on the other hand score some profit by selling their produce to grocery stores and restaurants that might be interested.

Shiitake aren’t generally grown in trays unlike most other mushrooms – even though that’s possible, it’s still a better idea to grow them on logs, yet still in a manner that gives you a good degree of control over the different factors of their environment – e.g. the humidity, temperature and the flow of air, all of which can have a great impact on the final outcome of the produce. You’re going to need some wood that’s been cut recently, developed mushroom spawn, and an appropriate place to do your growing at – you’re going to need some very precise lighting control, so it’s a good idea to grow Shiitake mushrooms in a place that’s dark to begin with. 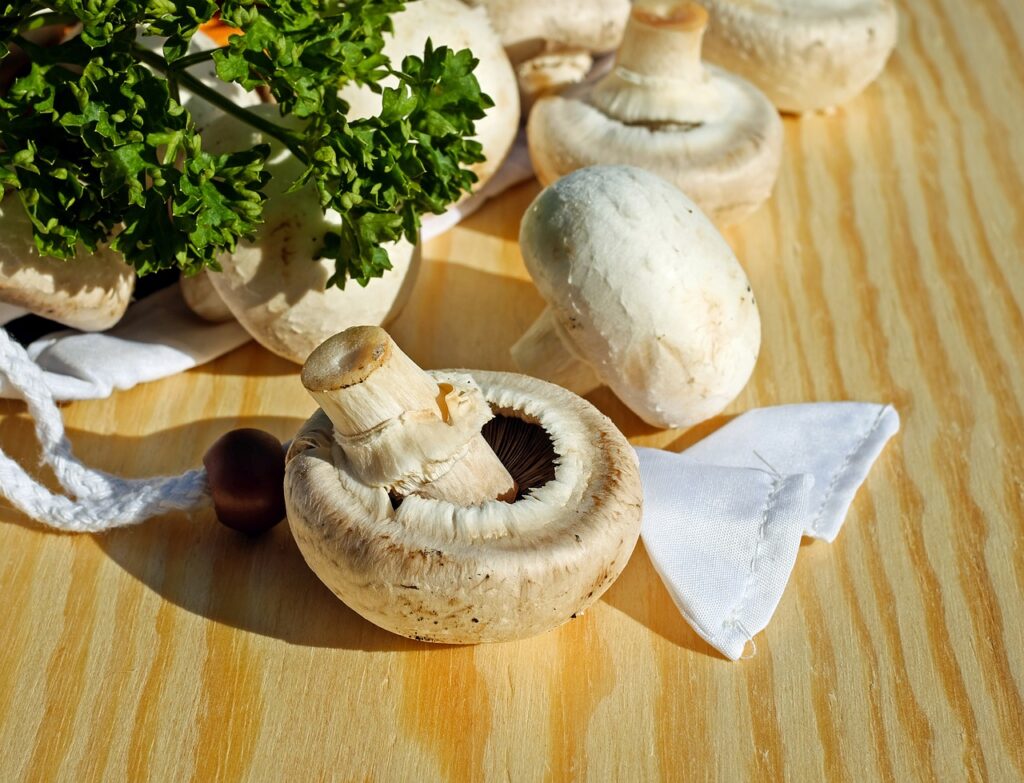 The type of wood can vary greatly depending on your local options, but there are some kinds that tend to work best in general – hardwood tends to be a lot better for growing Shiitake than most other types of wood, and oak is one of the best options in this regard. Make sure your logs are long enough, and thick enough as well – these can be important factors in the way your Shiitake fungi develop and grow.

Buying your mushroom spawn pre-made is a good idea when you’re growing Shiitake – we’re not talking about buying a whole growing kit, something which we’d generally advise against (because it can degrade your ability to learn the intricate aspects of mushroom growing properly), and you’ll typically get yours in either syringes or sawdust that’s been pre-mixed with the spores to create the spawn. It doesn’t really matter what type of container your spawn comes in, though if you’re going with sawdust you would likely need an extra tool for inoculation, but that’s generally easy to come by, even from the same people that sold you the spawn in the first place.

Preparing your logs is going to take a while, just like when you’re growing regular mushrooms and you’re preparing their substrate – logs have some bacteria on them that the tree uses to fight mushrooms (called fungicides) and those don’t die off immediately after cutting the tree, they actually take a few weeks to completely go away so you’ll want to wait it out and be sure that the log is clean of any fungicides before proceeding. Preparing the logs involves drilling holes in them and then filling those holes with the spawn – you’ll also want to finish it off with beeswax around the top of the holes to protect the spawn that’s growing inside them, while also facilitating the spread of the mycelium throughout the whole log.

While you can do this indoors, it’s a good idea to do it in your backyard or another open area where you can get better ventilation for the mushrooms you’re growing – although you would have to sacrifice your ability to control the growing’s aspects more closely, it’s still a worthy compromise if you want to get a better yield in the end. You’ll want to look into some precise decontamination methods for after you’ve grown the mushrooms though, because there’s generally a higher risk of running an infection when you’re growing outdoors.

Shiitake mushrooms take an incredibly long time to grow – much more than any regular type of mushroom you might be used to. That’s pretty much the reason they cost so much on the market as well – farmers just don’t see them as a worthwhile investment if they have to charge a low price for them. You’re going to need at least six months to see the initial results of the growing, and that’s if you’re lucky – sometimes Shiitake mushrooms can take up to a year to develop properly, so be very patient.

Rain – and hydration in general – is very important in all this, as it accelerates the growth of your Shiitake mushrooms significantly. You may actually notice that the mushrooms appear directly after a day of rain or during a rainy period in general – so if you’re going through some dry weather at the moment, you may want to apply additional hydration to the logs to ensure that the mushrooms grow properly and don’t die off. It may be a good idea to submerge the whole logs in water in order to give proper hydration to the mushrooms growing inside them, though don’t overdo that as too much hydration can easily attribute to their death just as the lack of it.

In the end, if you do everything properly, you’ll be left with a nice batch of Shiitake mushrooms ready for use in a salad or a delicacy which you’ve learned from Asian cuisine. The applications of this mushroom in cooking are quite diverse and there are many ways to utilize their exquisite and remarkable taste – and even though you’re going to need some good cooking skills to pull that off right, the mushrooms themselves can easily compensate for not being good enough in the kitchen. And if you have any leftovers that you can’t finish by yourself, you always have the option of selling them to your local grocery store or even a restaurant that serves delicacies and exquisite meals, and earn back some of the money you’ve invested in the growing in the first place – or if you’re lucky, all of it!